New MLS faculty member has worked around the world 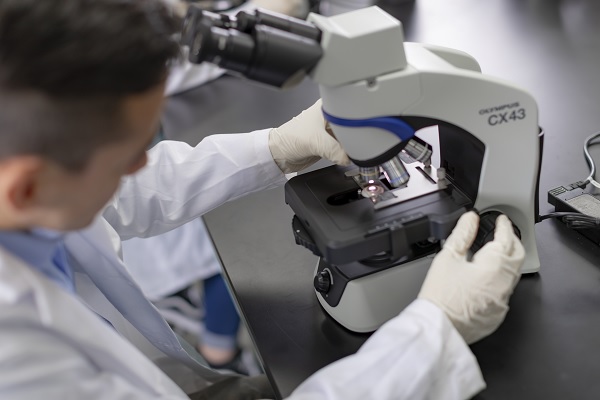 Assistant Professor Terri Murphy-Sanchez, CSMLS, ASCP, has lived and worked in three different countries, a global experience she said was made possible by the medical laboratory science profession.

“I like to think our profession is very portable and a great stepping stone,” said Murphy-Sanchez, who joined the Medical Laboratory Sciences faculty in August 2019.

Murphy-Sanchez attended college in her native Canada and worked at a large pediatric hospital in Toronto before moving to Saudi Arabia, where she worked in two different hospitals.

“I had an uncle in insurance who had lived and worked there,” she said of her decision to move to Saudi Arabia. “I wanted to travel and meet new people and experience a different culture.”

It was in Saudi Arabia that Murphy-Sanchez met the man she would marry, a native of San Antonio. The couple and their first child eventually moved to San Antonio, where Murphy-Sanchez worked for a hospital before accepting a faculty position at UT Health San Antonio in 1999. She later joined the faculty of St. Philip’s College, where she attained tenure as an associate professor and served as clinical coordinator and eventually program director of the medical laboratory technician and phlebotomy programs.

In her current role, Murphy-Sanchez teaches Clinical Microbiology, Advanced Microbiology, Special Topics, Hematology and Advanced Hematology for master’s students. She loves teaching and considers her return to UT Health San Antonio to be a homecoming of sorts, as well as an opportunity to engage in research and engage her students in an active learning environment.

“I am excited to be back at UT Health,” she said. “I love teaching, and I love doing all these different things. I like to participate in community health fairs because in our profession we are responsible for the point-of-care testing.”

Murphy-Sanchez, who serves as a national accreditation site visitor for the National Accrediting Agency for Clinical Laboratory Science (NAACLS) and as a committee member of the Clinical Laboratory Standards Institute (CLSI), believes her professional experience demonstrates the versatility of the profession, which she said can carry the undeserved reputation of being a refuge for introverts who do not venture beyond the laboratory. Medical laboratory scientists today engage  a range of roles and many other activities beyond the lab, including public speaking, she said.

“You can make the profession what you want it to be,” she said. “We are no longer hidden in the basement.”