Master of Physician Assistant Study Graduates Have a Bright Future 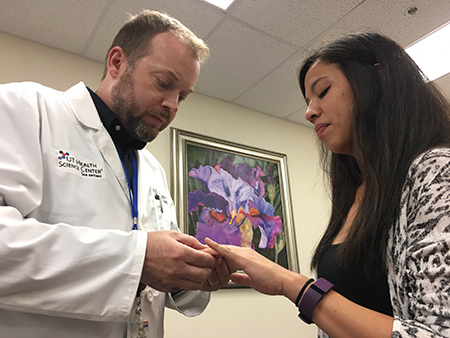 Data from the National Commission on Certification of Physician Assistants reveal that 46.4 percent of the program’s graduates from 2013-2015 accepted jobs in family medicine/general practice and internal medicine/general practice upon certification, compared to 25.6 percent of certified graduates from other programs nationwide during the same time period.

Program Director and Chair Paul Allen said the program has made a sustained and concerted effort to meet the need for primary care healthcare providers.

The data also show that more than 42 percent of UT Health San Antonio PA graduates accepted their first job at one of their clinical rotation sites, compared to 34.7 percent of all recently certified PAs.

“The data would suggest that the clinical experiences have an impact on where they choose to practice,” said Brent Shriver, associate professor and academic coordinator for the Department of Physician Assistant Studies.

The Department’s mission to graduate primary practice health providers has been made possible in part by a $980,000 federal grant awarded in 2011 by the Health Resources and Services Administration. As part of that effort, the Department has worked to increase the number of primary care clinical rotation sites “that are not within the easy confines of the city,” Shriver said, adding that students are eligible for a $1,000 stipend if they complete an extra primary care rotation in a medically underserved area or health professional shortage area.